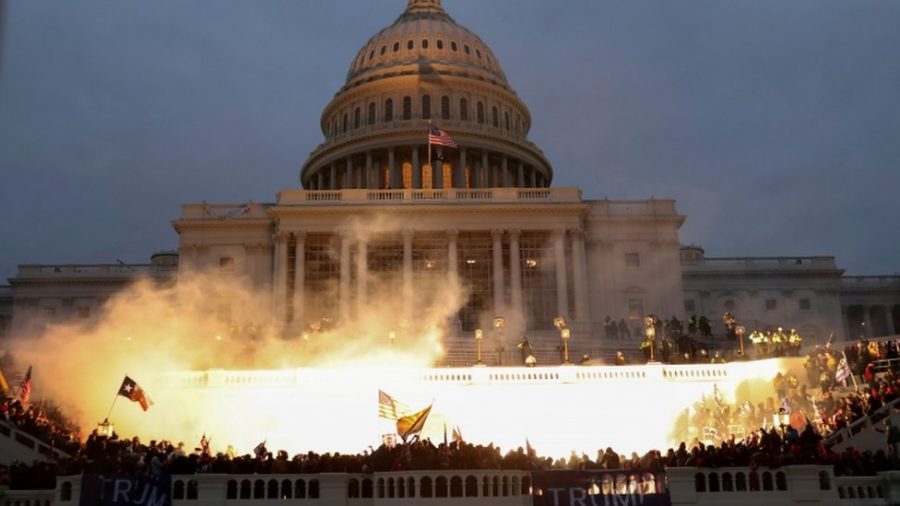 On January 6th, thousands of Trump supporters attended a “Save America” Rally in Washington D.C. As he addressed the immense crowd that had gathered at the Eclipse, a park near the White House, President Donald Trump claimed that the election was “stolen” from him.

“We will never concede,” he said. “It doesn’t happen. You don’t concede when there’s theft involved. Our country has had enough. We will not take it anymore, and that’s what this [the rally] is all about. To use a favorite term that all of you people came up with, we will stop the steal.” (Source: ABC News)

President Trump concluded his speech by calling for the crowd to move towards the capitol, where electoral votes were being counted to confirm President-elect Joe Biden’s victory. Federal law enforcement quickly moved towards the Capitol as well.

By 1PM ET, hundreds of Trump supporters had pushed through barriers set up along the Capitol’s perimeter. 90 minutes later, police reported that demonstrators had breached the building and the doors to the House and Senate were locked. The House floor was evacuated, along with Vice President Mike Pence who was preparing to perform his role in the counting of electoral votes. (Source: CNN)

An armed standoff took place at the House front door around 3PM, as officers drew their guns in response to an attempted breach.

A woman was shot on capitol grounds and later identified as Ashli Babbitt, a California resident and Air Force veteran. Three other people died as a result of medical emergencies during the chaos, and a U.S. Capitol Police officer was killed by injuries sustained while physically engaging with the crowd.

At least 52 arrests have been made; four for carrying pistols without license, one for possession of a prohibited weapon, and 47 for unlawful entry and curfew violations.

Wednesday’s scene shocked the nation and prompted immediate reactions from across the political spectrum. Many Republican figures were quick to distance their party from the actions of those at the Capitol. Republicans have asserted time and time again that they are the party of “law and order,” and statements following the attack on the Capitol express a desire to return to those values. Texas Senator Ted Cruz spoke on Twitter, saying that “those engaged in violence are hurting the cause they say they support.” House Minority Leader Kevin McCarthy stated that “this is so un-American. I condemn any of this violence.” (Source: Fox News)

The Democratic response has deemed Republican opponents hypocritical, as they compare police responses to last summer’s Black Lives Matter demonstrations to what was seen at the Capitol. In a statement on January 7th, one day after the events in D.C., President-elect Joe Biden said, “No one can tell me that if it had been a group of Black Lives Matter protesting yesterday, they wouldn’t have been treated very, very differently than the mob of thugs that stormed the Capitol. We all know that’s true, and it is unacceptable.” Many assert that President Trump’s remarks are responsible for inciting the insurrection. Biden said that the President’s words were a “culmination of attack on our institutions of democracy.” As he spoke, he charged Donald Trump with “Inciting a mob to attack the Capitol, to threaten elected representatives of the people of this nation, and even the vice president, to stop the Congress from ratifying the will of the American people in a just-completed free and fair election.” (Source: NPR)

The House approved a resolution to formally call on Vice President Mike Pence to invoke the 25th Amendment, which would allow a cabinet majority to remove President Trump from office. They gave him 24 hours to respond, and announced that they planned to move forward with impeachment if he did not. (Source: CBS News)

When Pence did not invoke the 25th Amendment, the House voted 232 to 197 to impeach Donald Trump for a second time. While impeachment won’t force President Trump to leave office (Senate Majority Leader Mitch McConnell has stated that the trial won’t take place until after Joe Biden is inaugurated) the trial could affect future plans to run for office.  (Source: CNN)