Students work together to brighten the music suite 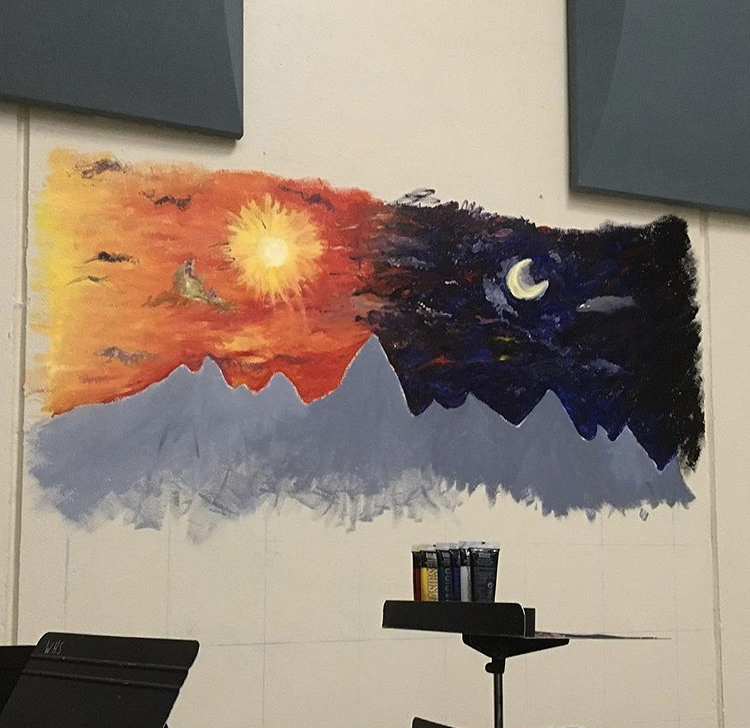 This mural, depicting mountains under a sunset and a night sky, is half-complete, with plans to finish it this fall.

Several music and art students have come together to bring a touch of life to the choir room in the music suite.

The choir room is now home to another kind of art; the singers have turned into painters. This different art in question is a mural, created by “in-house” artists here at Waunakee High School. Sophomore Jonah Leland is the mastermind behind this project, which consists of a seven by eight-foot mural depicting a sunset and mountains on the choir room wall, painted during the summer, with plans to slowly add to and perhaps complete this October.

Leland shared the inspiration for his idea. When asked why he wanted to create a mural, Leland responded, “To add something interesting to the choir room that makes it different from the rest of the school.” Further, he said that, “[The mural is] a nature scene because the choir room has no windows and we want to bring the outside in.”

He also added that he was took his idea from a different piece of art in the high school. For those that may not know, this is not the first mural here at WHS. One made a few years back is located in the band room, and consists of a mountain range, a bear, and assorted flowers. This mural has served as the inspiration for the high school’s new-generation mural.

Every week during the school year, this new mural will be seen by over a hundred music students, thanks to the work of Jonah Leland and fellow sophomores Elliot Petroff, Maddy Nelson and Sydney Jezik, who are his primary collaborators.

In addition to painting, there is a definite buzz of activity in the music suite this time of year. Right now, there are around 150 students enrolled in choir classes, taught by vocal instructor Mrs. Molly Petroff. Kickoff Concert took place Monday, October 8th. It had a full program including Chorale (freshmen choir), Grazioso (sophomore girls choir), Concert Choir (sophomore boys and upperclassmen choir), Kee Notes (vocal jazz large ensemble), and small groups that performed songs like “A Million Dreams” from The Greatest Showman and “Royals” by Lorde. Choirs started preparing weeks in advance, while small ensembles made song choices as long ago as last June.

“We [Concert Choir] just started ‘Superstition’ by Stevie Wonder,” said Leland. The song was performed during the Kickoff Concert. Leland said he enjoys choir. “It combines many grade levels for a common goal and lets you meet new people while having fun,” he said.

The vocal department’s upcoming projects include a Choral Festival on Wednesday, October 10th, which will take place in the high school fieldhouse. For things such as the Kickoff Concert and the Choral Festival to be successful, it takes student-motivated efforts. That’s what Leland’s mural required, too. He, along with Petroff, Nelson and Jezik, took the initiative in June and have worked to splash the music room with outdoor themes and colors.